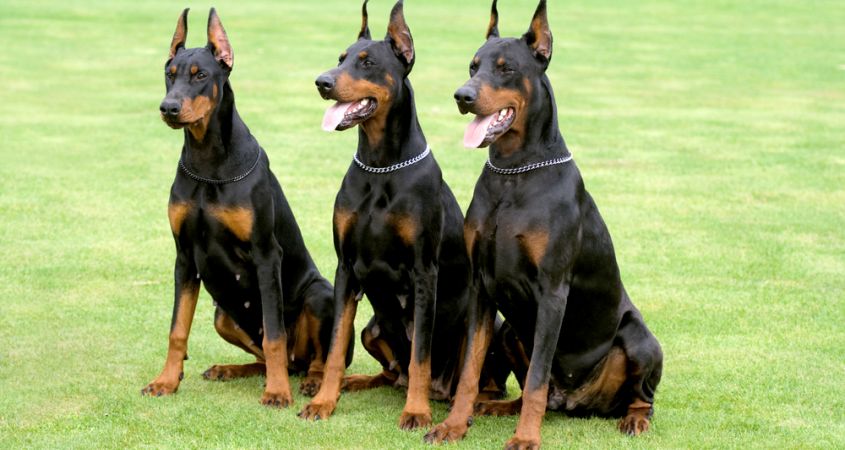 Five of the Best Breeds for Guard Dogs

We all know dogs as Man’s Best Friend, and with good reason. Dogs are among the most loyal companions one could ever ask for, and as such, are among our finest and most ferocious protectors. No would-be burglar wants to deal with the low growl, menacing bark, and sharp teeth of a massive guard dog. It is for that reason that, even in the age of increasingly elaborate home security systems, having a good guard dog for your home remains one of the best ways to protect your family.

This is due in no small part to the fact that these guard dogs, while rough and gruff with intruders, can be loveable and absolutely adorable around family members.

Of course, not just any dog breed will do. A Shih-Tzu or wiener dog, while loveable, won’t be striking fear into the hearts of burglars any time soon.

By contrast, these five breeds rank among the best guard dogs for sale.

Big, imposing, muscular, loyal – in many ways, a German Shepherd is the classic guard dog prototype. What’s more, German Shepherds are among the most courageous of dog breeds. There is a reason they are a first choice of police departments around the world.

The raw power they have from head to tail is incredible, making them great guard dogs. It is unfortunate that news stories commonly classify rottweilers as out of control creatures. The fact is those few whom we may read about on the news are more the result of bad ownership than anything else. In reality, most rottweilers, while very strong and full of energy, are disciplined dogs.

Yet another great German breed on this list, Dobermans follow much the same pattern as Rottweilers. Let them run loose as a neglectful owner, and you’re asking for trouble. Take the time to train and care for them, however, and you’ll have a faithful friend and ferocious, but well-disciplined, defender for life.

While Scooby Doo is undoubtedly the most famous Great Dane in fiction, in reality Great Danes are far more courageous (even without a Scooby Snack.) They do, however, retain Scooby’s mellow, good-natured personality, making them possibly the best choice here for families.

Last, but not least, boxers are a bit more compact, making them a better option for those looking to buy a guard dog while living in small spaces. In addition, they’re bright, loving dogs whose bark really is worse than their bite. That said, a boxer’s bite can still carry quite a bit of force, making them a formidable threat and family-friendly dog all wrapped into one.

By buying a great guard dog, you’re giving your family a great friend and defender for years to come.

A Look at the True Benefits of Visiting a Chiropractor

How to Protect Your Hair in Summer

How is a Professional Paint Job Important?